The complexity in the simplicity: the drawings of Alberto Cruz

The clean lines of Oaxacan artist Alberto Cruz connect with people of all ages and backgrounds. He is known for working with the subject of childhood, but, most of all, his images synthesize complex emotions and ideas into concise, black and white images, which may deliver a different message to each viewer. At first, we see harmonic compositions involving children, animals, and everyday objects. Their simplicity could trick us into thinking they’re just sweet, nice drawings, but these minimalist compositions have the potential to generate introspection, and therefore, to create multiple stories, or to bring up contrasting feelings, memories, and life perspectives.

Black and white / Less is more

Ever since he was a little kid, all Alberto wanted to do was to draw, and, on the fly, he encountered printmaking. While taking sculpture and painting courses at the Arts Faculty of the Autonomous University of Oaxaca, he found it hard to work with colors, and thus realized that black and white worked out better for him. Later, he found out that printmaking was the closest discipline to drawing. Because of its simplicity and immediacy, linocut became his most used technique, as opposed to lithography, which is a much longer process, and, in his opinion, very easy to ruin. Nevertheless, both let him achieve the high contrast that he looks for.

For Alberto, high contrast represents a straightforward idea: “I want to synthesize an image into a two tone scale: black and white, so that the message could be more direct”. He wants his artworks to not necessarily depend on the brightness of color. As a man of few words, he compares vivid colors to noisy and futile blabbering; meanwhile, black and white carry the essence of the message.

In his art, less is more. He came to that realization accidentally, after making a lithograph that depicts a boy and a bull. The original drawing had a background scene, which took him five months to complete; however, the final print had a flaw, so he had to repeat it. In the process, he erased all the background, and synthesized it more. Since then, all his images are made in this manner: “I thought that the more elements it had, the more realistic and convincing it was going to be, but, in fact, it was only a prejudice, and now my artworks don’t have any background, because I understood it wasn’t necessary.” 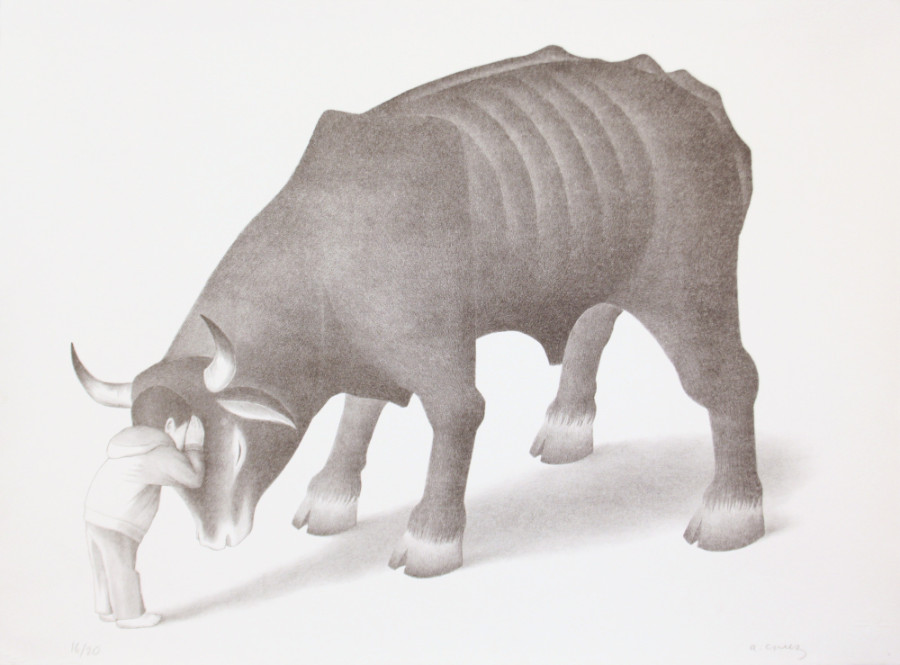 The intimate process of drawing

Drawing means many things to Alberto: a nine-to-five job, a private activity to do at home; a strict discipline with a rigid method. The final artworks take a slow process that includes a carefully planned series of steps: “that’s why they’re very small prints; bigger works take me 3 to 4 months: that makes me lose my mind, and also bores me to death.” He prints at Burro Press, his printmaking collective workshop, located in downtown Oaxaca City.

Among other influences, he cites the illustrations of British author Anthony Browne, and the sense of humor and poetics of Mexican artist Gabriel Orozco; but, in terms of resolving composition, his first aesthetic reference is his teacher, Oaxaca-based Japanese painter Shinzaburo Takeda. Alberto is not interested in telling stories; however, unexpected stories may emerge from the distribution of the characters and objects: “It’s all a matter of composition: what I’m drawing always surprises me, to me it’s impossible to believe I’m doing it, it’s as if it wasn’t me.” His compositions are schematic, like a recipe: “I choose a girl or a boy, an object, and/or an animal. Normally, these elements don’t touch each other, although they’re always close by or facing each other”. 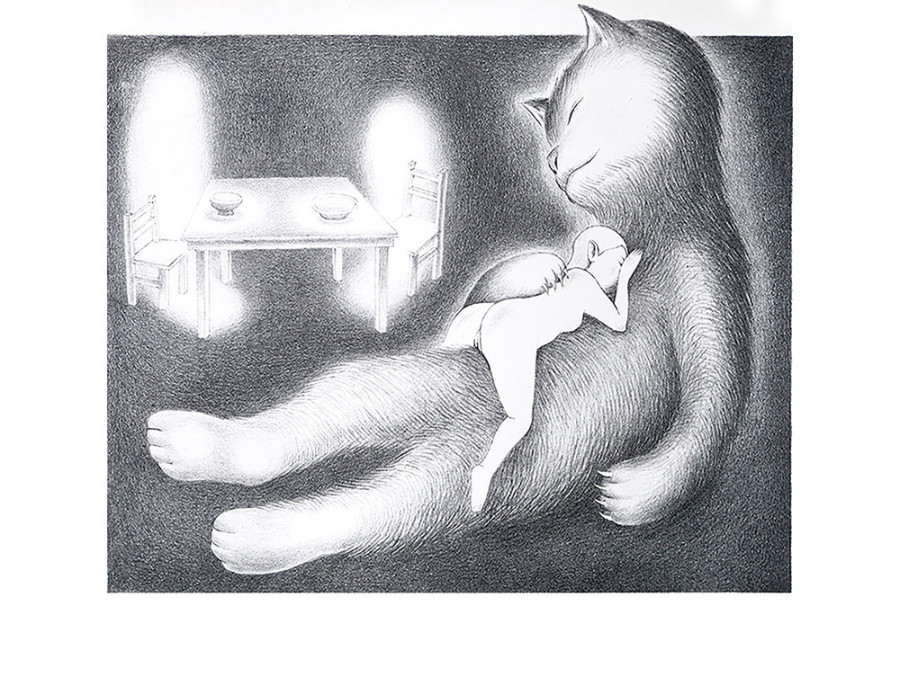 Children are the most honest: “If something bores them, they abandon it; they don’t make any compliment they don’t feel; they don’t say things just to please”, says Alberto. During the four years that he was an art teacher at a  kindergarten and elementary school, he found himself influenced by the way children think, have fun and figure things out for themselves. A philosophy enthusiast, he mentions Friederich Nietzche’s “Thus Spoke Zarathustra”, which reads: “The child is innocence and forgetfulness, a new beginning, a game, a self-propelling wheel, a first motion, a sacred Yes”. To revisit childhood means to trust and say yes to life, getting rid of the weight of the past: of old precepts, assumptions, fears, and habits.

The artist juxtaposes this symbol of innocence with attitudes and situations that may be regarded as grown-up: “I make them contrast. I love what they represent together. It goes beyond logic and expectations”. He says that sometimes one single image has brought on dissimilar emotions to different viewers. The children in his artworks appear parentless; sometimes strong and independent, bold and adventurous; sometimes shy, a bit lonely or melancholic. Sort of how Wes Anderson’s youngest characters are: stylized, precocious, runaway explorers who escape from the adult world.

The simplicity and expressiveness of his lines effectively remind us how, when we were young, we created new worlds during play, and through books and daydreaming we traveled to other places. It’s no surprise that frequently his work has brought to mind Maurice Sendak’s masterwork Where The Wild Things Are. Primarily, Alberto’s images speak to people of all ages, just as a good picture book does: this is the type of storytelling that fascinates him, he keeps a collection of them, and hopes to make one someday. 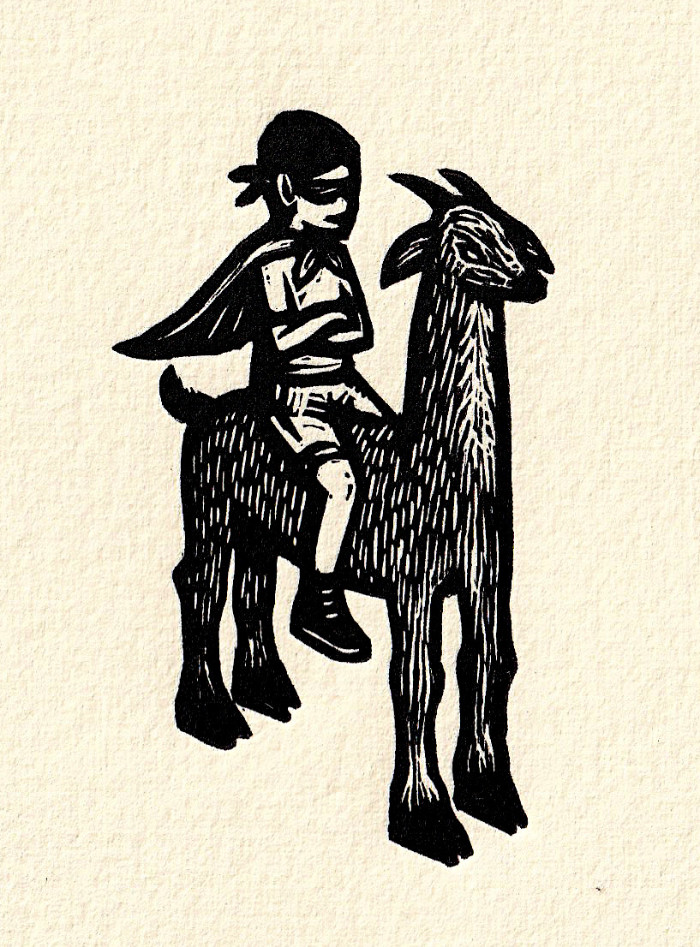 Alberto’s animal and human characters speak the same language. They are friends,  they protect each other, though sometimes they fight. “Animals have a personality due to their physical characteristics, their environment and weather; so I see some people’s behavior is like an animal’s behavior. So when a person is like a cat, they’re difficult to love, to approach, to share with; another person is like a dog: they’re pretty joyful, always loyal, and dependent; another is like a bull: they’re stubborn, irascible, and have a fixed mindset. As we are sharing the same planet, there has to be similarities between us”. He has two dogs, but, surprisingly, he doesn’t like cats: “I draw them a lot, because I love them aesthetically, but I don’t feel compatible with them. You know what they say, that in art you draw your fears. Well, I’m afraid of them.”

The polysemy of his images is activated even more by the fact that none of them has a title. He doesn’t aim to express specific emotions in his drawings; nor he wishes to explain the meanings of them, but he recognizes the polarities they may portray: “I may transit from joy to sadness, from solitude to company, although I don’t realize it. I think all human beings go back and forth between those feelings, and I think that’s what connects people with my work”. It amuses him that several people have told him they have gotten tattoos of his images. Then, he starts to laugh when he remembers his drawing where a kid is tattooing a crocodile. “Children have always had all kinds of emotions, just like adults, but they don’t know how to explain them, just like us; sometimes we still don’t even know what we’re feeling or how to explain it, but at least in this era we’re more aware of the role of the emotions in our health”, the artist points out.

A very small artwork, where a kid is sitting on a llama, is one of his dearest: “I made it just for the pleasure of doing it […] in Oaxaca’s graphic arts scene, since 2006, the trend was to make bigger formats, monumental prints to put in the streets, but this one is really tiny.” Although he didn’t consider the market trends or the possible buyers, it worked commercially. Besides, he felt that it created an emotional connection with the people, which is something that interests him: “unlike bigger formats, when looking at small prints, there is less viewing distance, and therefore more intimacy with the artwork, so the people connected more with this one. That made me think that I could make whatever I wanted, in whichever size that I wanted. It opened up possibilities in my mind.”

Influenced by children’s creative thinking, Alberto Cruz’s simplicity accomplishes to communicate complexity, through an economy of elements and high contrasts, not just between black and white, but between symbols. During his meticulous creative method, the artist forges compositions that have the capacity to make us revisit our first years of existence: to create stories and imagine new worlds; and, at the same time, to reflect as grown-ups about the polarities of human emotions.

* Karina Ruiz Ojeda has a MA in Art History, is an independent researcher, art and music curator. She also teaches Spanish as a second language. She lives and works in San Andrés Huayápam, Oaxaca, Mexico.