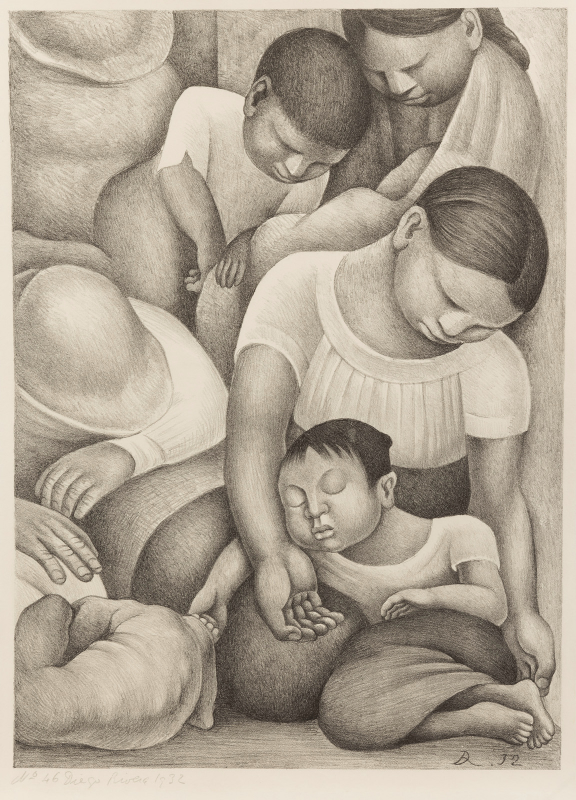 El sueño (La noche de los pobres), or Sleep (The night of the poor), is a part of a series of lithographs created by Diego Rivera that were published in New York by the Weyhe Gallery in 1932. El sueño portrays a group of Mexican campesinos, or rural peasantry, sleeping huddled together for warmth and support. Following the Mexican Revolution, representations of the peasantry were often used as a nationalist symbol to promote the ideal of social equality. In Rivera’s print, women, men, children and a dog sleep soundly. The woman in the top right corner of the work appears to cradle an infant who is wrapped in a shawl and protected from the elements. Her head rests softly on the head of the child next to her. The woman in the foreground supports another sleeping child on her lap. Two men occupy the left side of the picture plane and both sleep with hats shrouding their faces. The soft curves, delicate black-and-white tonal gradation, and the physical intimacy of the figures create a tender scene. Though El sueño is a calm, quiet depiction of people in repose, the limp bodies, hanging heads, closed eyes, and weary expressions also reflect the sorrow and the inequalities experienced by the poor during the period surrounding the Revolution. Perhaps far from home or without one at all, these people appear to be deprived of basic human comforts. Like many of Rivera’s depictions of the Mexican people, this image is tinged with both realism and optimism.

In 1931, Rivera traveled to New York City to work on a solo exhibition at the Museum of Modern Art. He created eight portable murals built on moveable plaster panels for the exhibition; these frescoes offered Americans a means to view his murals, many others of which were painted in place and therefore immobile and inaccessible to a wide public. While in New York City, he attracted the attention of Carl Zigrosser, director of the Weyhe Gallery. Zigrosser recognized the growing demand for Rivera’s work in North America and the need for a medium that would allow it to be more easily circulated. He encouraged Rivera to create lithographic prints with the goal of making his work more available to collectors.

Bolstered by Zigrosser’s suggestion, Rivera created El sueño and nine additional lithographs that were published by the Weyhe Gallery. A black-and-white print created with a lithographic crayon, El sueño is a detail from a 1928 fresco that Rivera painted in a courtyard in Mexico City’s Secretaría de Educacion Pública (Ministry of Education). Zigrosser publicized the prints by writing that they “give an idea…of the actual frescoes themselves, both in form and content, and in monumental design.” The original fresco, La noche de los pobres (The night of the poor), complements an adjacent fresco titled La noche de los ricos (The night of the rich). Together, the two murals form a diptych of contrasting social classes. Rivera’s social commentary criticizes the rich by depicting a scene of capitalist opulence alongside a scene of the disenfranchised poor.