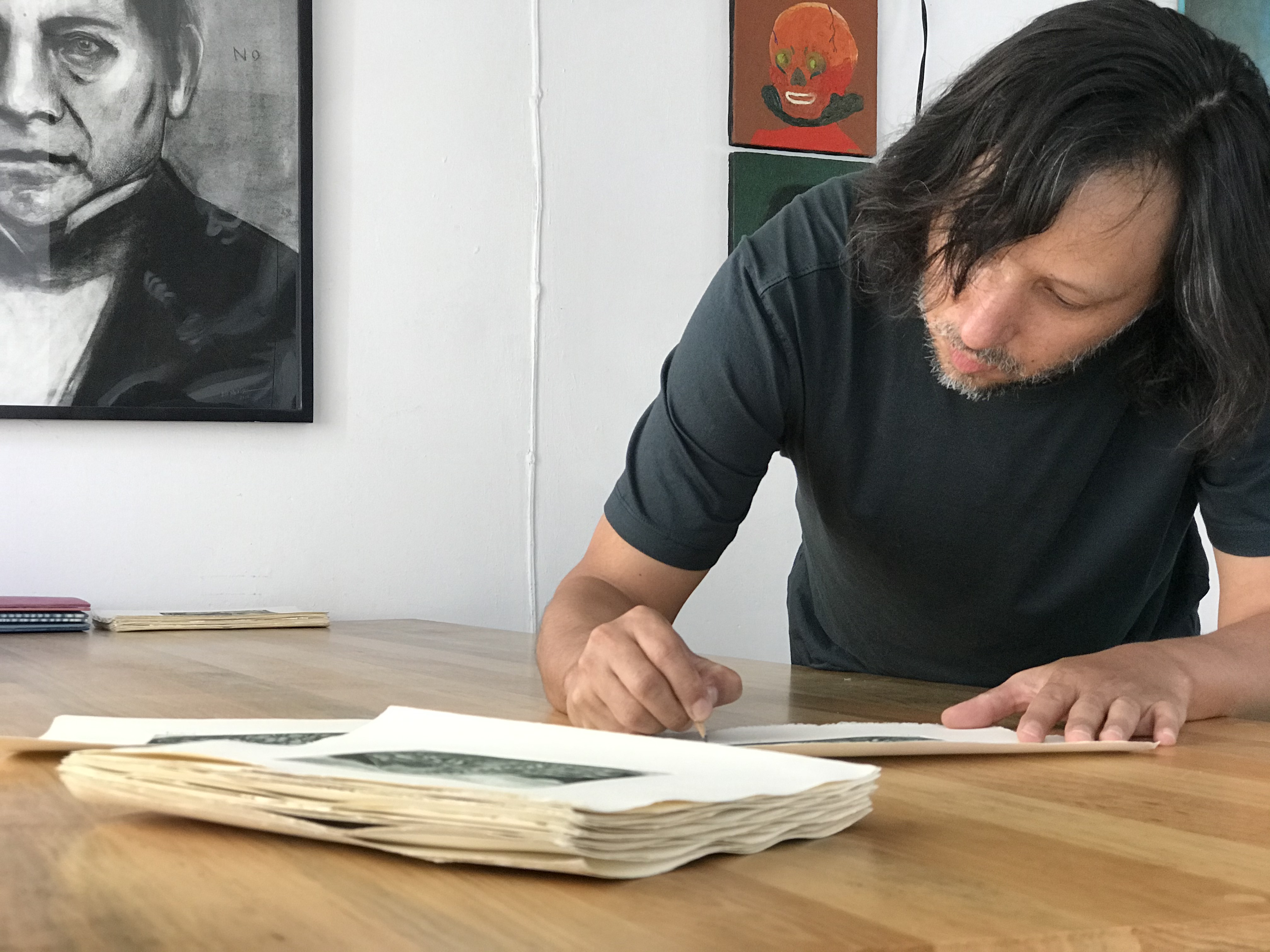 Written by Karina Ruiz Ojeda.
Oaxaca-based artist Alfonso Barrera is an acute observer with a rich background of references. His artworks consist of studies of the human body expression, of the forms of the natural and the symbolic. Through these explorations he creates narratives and characters with a force and nature of their own. He portrays the darkness and lightness of human condition, taking inspiration from eclectic sources, such as horror movies and pre-Hispanic art. Although he sees himself as a more traditional artist, he is always searching for new languages. Led by the free movement of his hand, he brings out dialogues between drawing and painting.

Finding a Voice in Oaxaca

Driven by the passion of creating, Alfonso’s artistic education has been quite organic and spontaneous. He grew up surrounded by art books in  his grandfather's library, who was a painter. By chance, as a teenager he took part in life drawing classes at the Academy of San Carlos, in Mexico City. He is also a musician, and for many years he built an artistic career between music and visual arts. But it wasn’t until 2005, that his life had a turning point: in order to focus on drawing and painting, he moved to Oaxaca, a city that would boost his artistic explorations. Here, the first place Alfonso visited was the library of the Graphic Arts Institute of Oaxaca (IAGO), as he recalls, “I did nothing but go to the IAGO library, where I started to learn about tons of artists; it was, in fact, my college”.

In some of his artworks, Alfonso pays tribute to Francisco Toledo, the late Mexican artist and philanthropist who, among many other projects, founded the IAGO library, giving all the visitors free access to thousands of art books. Many artists like Alfonso have received a visual education at this library, which has contributed to the diversity of arts in Oaxaca. In this city, Alfonso found his own language, while  he learned empirically from different artists and had several solo shows in local galleries, which took his work to Japan and the USA. 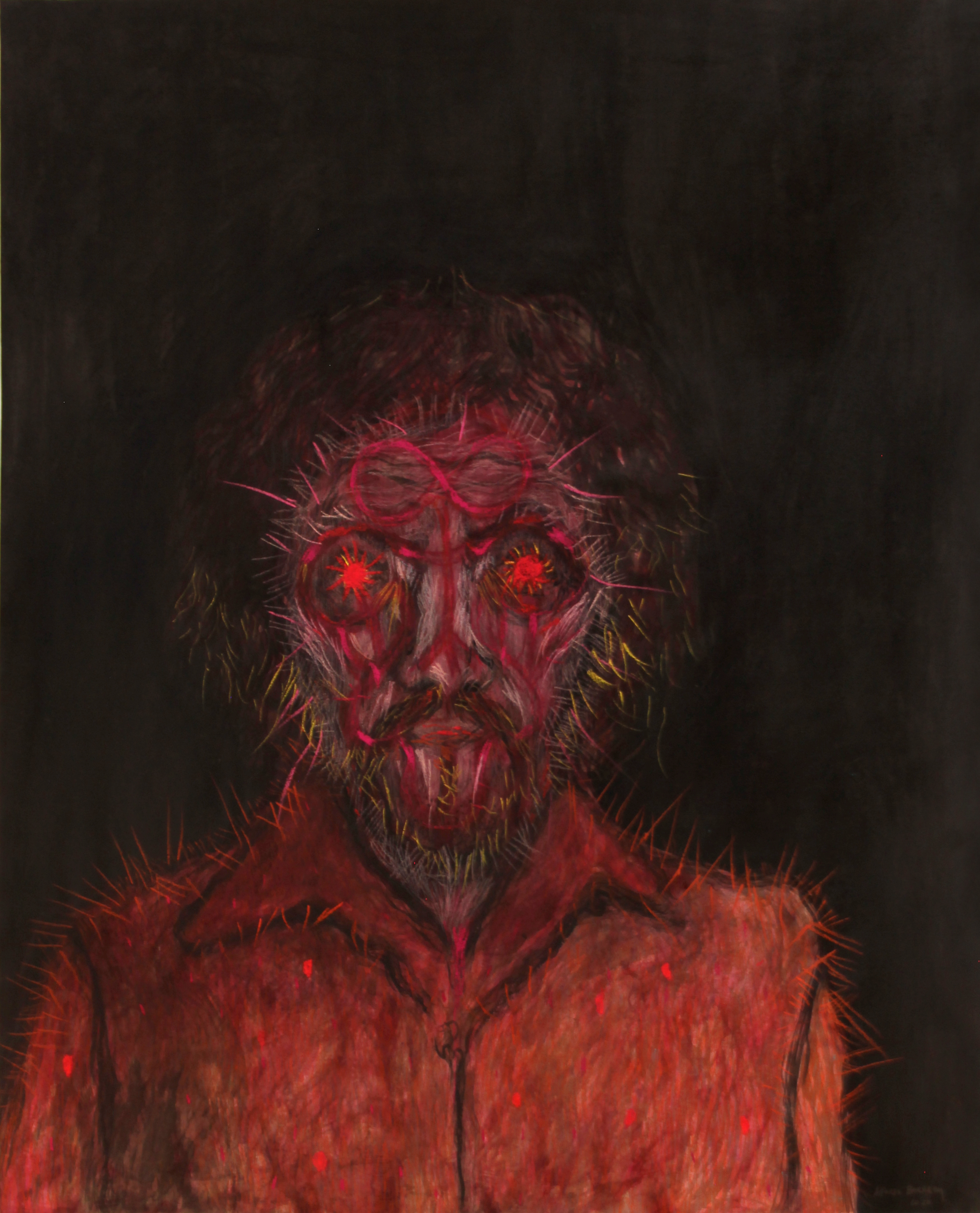 An Art History Nerd and his Relationship with Music

As a passionate self-taught artist, Alfonso is an Art History nerd. If you ask him about the art he likes, he’ll give you a longlist of artists, dead and alive, whose work he admires, and what their superpowers are: Walker, Doig, Hernández; Andersson, Izquierdo, Velasco; Rembrandt, Caravaggio, Della Francesca; El Bosco, Barceló, Velázquez; Kokoschka, Soutine, Millet. He explains that “though the citation is unconscious, some of my artworks are deliberately homages”. The work of Alfonso makes us think about the creative process as a series of steps, which include selection, variation and reinterpretation. As Jonathan Lethem says: “most artists are converted to art by art itself. Finding one’s voice isn’t just an emptying and purifying oneself of the words of others but an adopting and embracing of filiations, communities, and discourses.”

His artistic explorations are fueled by the free movements of his hand; the same hand that plays a chord, draws a line and paints a stroke. He shares, “regarding music, I’ve always been into improvisation. I'm a solo guitar player, so the most beautiful thing to me was being able to play guitar solos in a band, while the other musicians were playing in the background”. He brings to mind that sensation when he works with the brushes; he connects with painting through improvisation and freedom of movement. As he tells us, “I like that punk attitude in creativity: not giving a fuck. At first, I was too cautious when I painted, but then I threw myself into the ring.”

Drawing, Painting and Their Intersections

Drawing can be the beginning of every idea; British artist Maggi Hambling once compared it to handwriting, for it is the most immediate and intimate thing an artist does. Alfonso’s art comes from the impulse to draw lines, half tones, and shades, but his works are open dialogues between drawing and painting; currently, he finds more freedom working with these disciplines, as he feels more confident and close to them. About his experimentation with techniques and materials he explains, “You can draw with oil, with gouache; even with other materials. Right now I'm mostly exploring oil painting. It brings up a lot of possibilities, as it gives me the opportunity to consider a longer process, because you have to wait for the paint to dry; unlike gouache, which dries faster”.

His images are honest displays of references, experiences, and emotions. We could enlist all the differences between drawing and painting techniques, but what they share in common is the pattern of movements that create the marks. At the end of the day, what we see is the outcome of the artist’s unique repertoire of gestures. As Paul Crowther points out, “Drawing, and painting are the products of gesture. As such they can embody individual style in how the surface is marked. In this sense, they are autographic”. 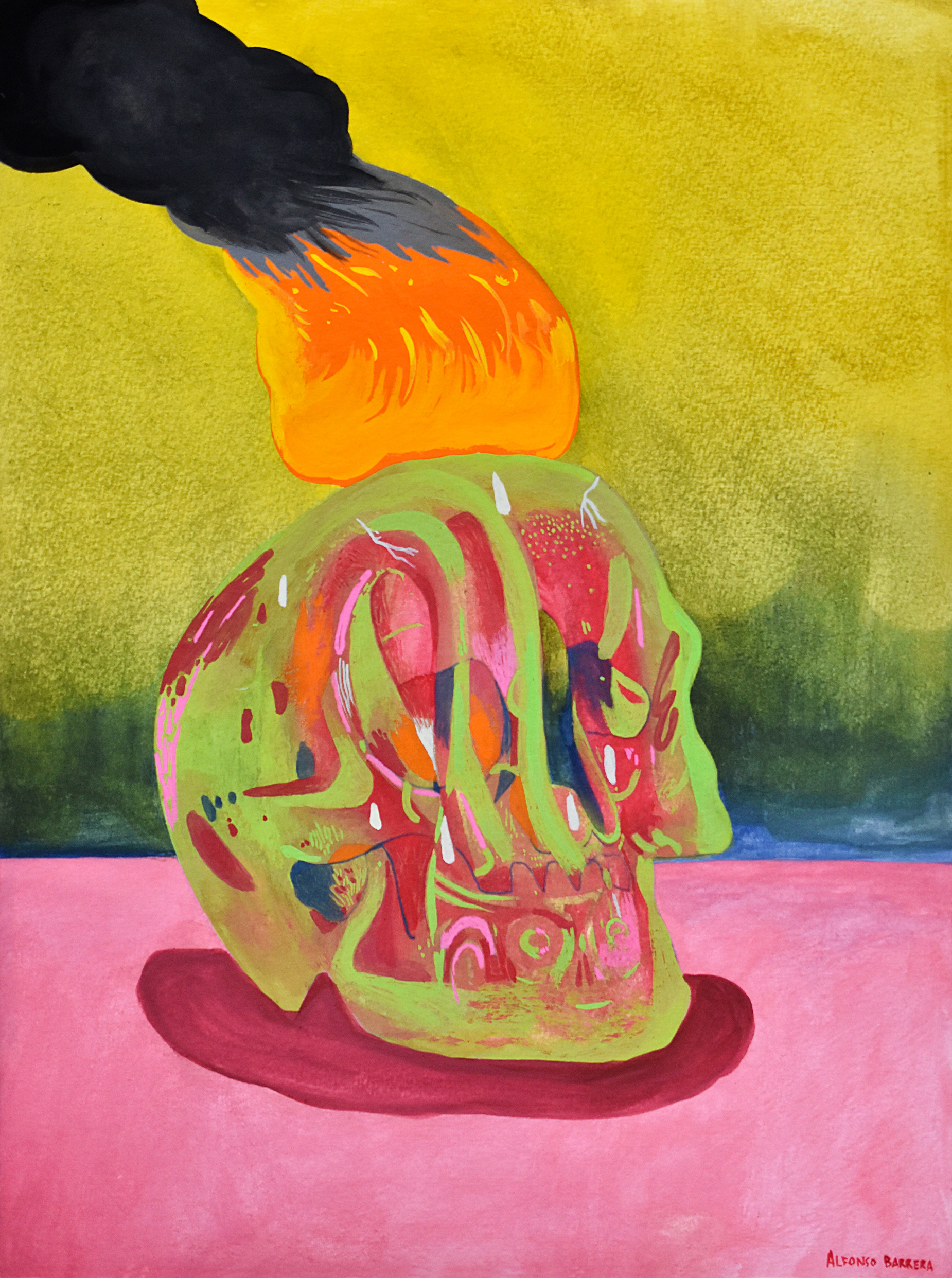 The Stories and Contrasts in his Art

If we look close enough, behind those sometimes mysterious images we can find Alfonso’s particular sense of humor, which his friends know him for. As he puts it: “unconsciously, there might be hints of humor in my pieces, but some are deliberately made that way”. For instance, right now he’s working on a piece inspired by Jesus  Christ's descent  from the cross by Fra Angelico, but in his version, it is a woman dancing reggaeton. Likewise, you can find a trace of black humor in some of the characters' gestures, who are involved in gloomy scenes; they live their absurdity with a slight grin on their face.

On the other hand, he’s a declared fan of the horror film genre; although this type of cinema has always been present in his work, sometimes gloominess doesn’t appear deliberately. We explicitly find characters from famous horror movies in his artwork, however, horror is also treated in his work like a sensation, like an atmosphere, like a look; like the attitude of humans watching the world in flames. He seems fascinated by the variety of emotions which people deal with during turbulent times, because, as we know, from a certain perspective, it’s not the exterior world that matters, but the attitude we have towards it.

Either in faces, skulls or masks, whether human or animal, the expressive gazes in Alfonso’s images confront us with questions. He clarifies the intricate meanings of his images when he says, “even though an artwork is a portrait, it’s not just the figure; it has a background, a story. It involves the speculation and subjectivity of the viewer”. Other pieces have a clearer narrative, like a painting he made for a IAGO exhibition, about which he explains, “I wanted to depict conflict; while some people were fighting on a boat, others were calm as if nothing were happening, and  others were kind of celebrating”. Alfonso’s work portrays the dichotomies of human existence: although sometimes his work could be interpreted as ominous, it conveys a lot of light as well. The artist paints somberness, but also dreams, hope, and affection. He bears in mind the work of the tenebrist painters, who used darkness to emphasize light.

His inclination to paint scenes is related to his interest in telling stories. Just like  American painter Nicole Eisenman, who he cites as a recent inspiration, Alfonso depicts scenes that are somewhat dark, slightly humorous pieces of ordinary life. Through the fluidity of his brushstrokes, he presents the sensations, the gestures, and the heaviness of contemporary human hearts in contrast to the luminosity of the colors he chooses. He is constantly drawn by contrasts, as we can tell when he counts religious art among his influences, “it shocked me that something so gruesome as the crucifixion could become something so beautiful through painting”.

What would it have been like to make a portrait of Mesoamerican people? That’s a question Alfonso seems to make to himself in his pieces Hombre mesoamericano and Mujer mesoamericana, the latter reminding us of the Coatlicue, the grand and enigmatic Mexica sculpture that represents the mother of all gods. In this exhibition, pre-Hispanic art was his main source of inspiration, especially codices and ceramics.

Some artworks can be regarded as his own versions of pre-Hispanic urns: effigy vessels with anthropomorphous or zoomorphic divinities, which were often found in tombs. In Máscara de Sol and Máscara de Jade, we find his personal take on pre-Hispanic masks, which were sumptuous objects often used in mortuary rites. Others portray the nature and the symbolism of mythic animals, such as the jaguar, the coyote and the pezotli, a little mammal characterized by its voracious appetite. The colors and textures used by  Alfonso’s distant teachers are also present in this series: Tamayo, Toledo, and Hernández.

In 2020, during the lockdown, he spent seven months preparing this exhibition,  fully focusing on painting, while working with other materials and techniques. “Mesoamerican Bestiary is inspired 100% by Oaxaca, it’s a mirror of the tremendous diversity and the communities’ cultural heritage”, he points out. Alfonso’s spontaneous and free creations reflect his unique set of references, and gestures palette. He remains humble and keeps learning from other artists and from his own practice, thus, he persists in finding new ways of expression. In 2012 he founded the independent editorial project Polvoh Press, which specializes in artist’s books, and lately he has been exploring ceramics.

* Karina Ruiz Ojeda has a MA in Art History, is an independent researcher, art and music curator. She also teaches Spanish as a second language. She lives and works in Oaxaca City, Mexico.