Contemporary Art in a Four-Hundred-Year-Old City?

Born in Montana, Terran Last Gun is a member of the Piikani (Blackfoot) Tribe. He trained at the Institute of American Indian Arts in Santa Fe. Having come to appreciate the city’s rich arts community, he remained here after graduating in 2016. He says the IAIA community has allowed him to be more open-minded, to explore, experiment and try new things.

He brings a distinct graphic sensibility to his printmaking and ledger drawing, works inspired by the Plains Indian tradition of making narrative drawings in ledger books. Last Gun sees these as a continuation of Piikani aesthetics and narratives. While the forms and colors in his work have a contemporary feel, they are derived from symbols painted on Piikani lodges. For instance, a recent series consists of serigraph-printed paper bags, each featuring a colorful disk shape inspired by Piikani sky narratives and, as he says, “by our place in the cosmos as not only Piikani people but as human beings in general.”

Last Gun is currently working on a series of small ledger drawings. They feature intriguing geometric constructions: disks and rings, or stripes and bands, in translucent colors, precisely drawn over antique ledger pages. He explains that he is “documenting, exploring and reimagining these symbols, shapes and stories to create new Piikani visual imagery and to add to our ancient visual vocabulary.”

See all of Terran's works. 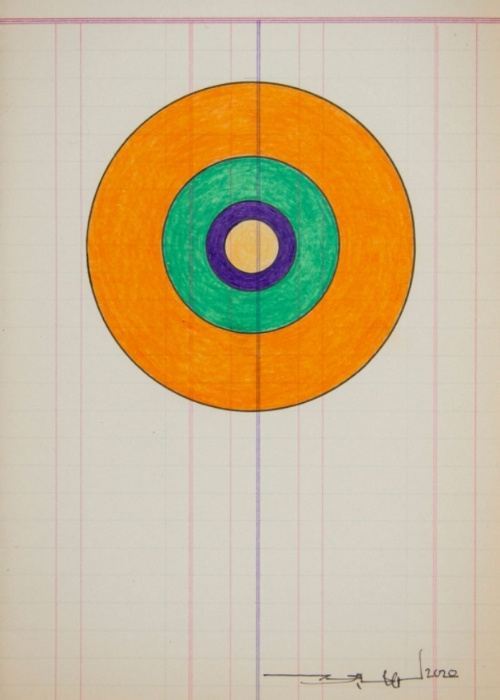