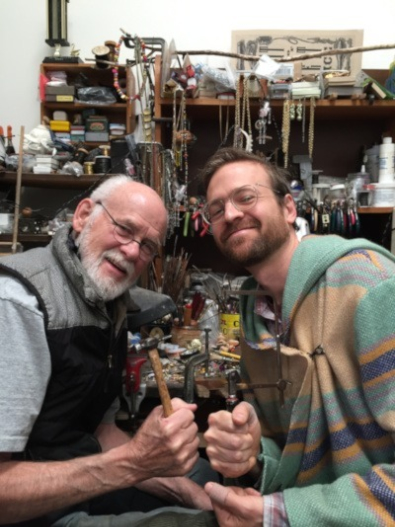 For nearly 60 years, Robert Ebendorf has been re-purposing existing materials by devising ingenious uses for the discarded and discovering ways to make the used into the new. Known for contemporary jewelry that includes everything from buttons to crab claws, he continues in his investigations into “representations.” Ebendorf’s conceptual approach to jewelry questions the nature of adornment itself and explores alternative materials and ideas about the preciousness of jewelry. The creativity of his jewelry lies not only in the intellectual repositioning of familiar objects, but more in the physical transformations of materials that astonish the viewer. It is exactly this sense of astonishment that gives his pieces their value. The profound incongruity between what his pieces are made from, and what they become in his hands, engages the imagination.

Bob is a Fullbright Scholar and founding member of the Society of North American Goldsmith and recipient of their 2014 Lifetime Achievement award. His jewelry is collected by 26 museums worldwide and in 2003 the Smithsonian Museum hosted a 40-year retrospective of his work.